A little while ago Derick Dupré mentioned on Twitter that was interested in reading a novella and so I dutifully recommended Aura by Carlos Fuentes, which is definitely a go-to recommendation for me.  But it got me thinking – why not recommend a bunch more?

I love the novella form.  I try to read either 500+ monsters, or books under 200 pages.  I want something sprawling, or I want it tight and effective and honed in on an idea.  Novellas are an exceptionally interesting form, and one that seems to be in fine favour across the world.

All of these can be easily read in an afternoon, and should be – novellas benefit from single-sitting reading, and the afternoon is best as you can then discuss it over dinner with your loved ones while they dutifully listen and smile and nod.

Today I am going to focus on novellas that were originally written in Spanish.

And so, here a handful I strongly recommend –

Twenty-eight people come together to tell the story of Eusebio.  Each of the chapters conflicts with and complements the others as Eusebio’s life comes into focus.  Though each chapter is short, they are wide-ranging, and the description of Hell comes to my mind quite often, particularly those weeping on a metal bed in a tower made from fire.  Eusebio’s many lives are fascinating and there’s just enough in each chapter to whet your appetite for this to be a full-fledged novella on its own.  To do this 28 times is pretty incredible. 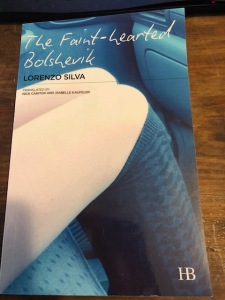 It begins simply enough.  A man out driving accidentally slams into the back of a woman’s car.  She is abusive to him (somewhat rightly), but he decides to exact his revenge by destroying her life.  This is all fine and entertaining, but then the narrator meets Rosana, the woman’s sister, and finds himself in love,then –

And then, read for yourself.  I’ve read this book a couple of times, and each time as the novella comes to a close my heart beats with dread and hope.  There’s a palpable sense of death that is evident from the first pages and concretely realised by the end.  The book drips blood.

The narrator is not a fine person by any stretch, and even his affection for Rosana is really just lust for a teenage girl.  But Rosana herself is appealing, and her inevitable destruction hurts when it comes.

Eduardo Sosa, unemployed, accidentally assumes the identify of a homeless man who lives in a car.  With four poisonous snakes.  Sosa finds this precarious existing appealing, even sexually appealing, and engages in a bout of rampant murder across San Salvador while fornicating with the snakes.  This is a strange, violent, hilarious book which lands a little less successfully than his novella, Senselessness, but seems to be less well-known and so deserves a mention.

Castellanos Moya blends humour and violence together very well; there is a kind of casualness to death in his books that helps spark ridiculous situations.  Death isn’t cheap, but it is common.  I also quite like the novella being written in the present tense, as it helps create a sense of urgency around the madness of death and snake-sex.

I must say that a book which has its main character own a bookstore, is alright with me.  The narrator notices a beautiful young woman in his bookstore, and notices too that she is stealing.  Rather than confront her he instead keeps an eye on the books she steals, in an effort to better understand her.

It turns out the woman, Severina, is stealing these books for Señor Blanco, a man who is – her father?  her grandfather? her husband?  Some mystical force?  It isn’t clear, and everyone, including Señor Blanco himself, has a different story about his identity.

What starts as a concrete and understandable story of infatuation quickly becomes strange and dream-like, with the answer to the mystery of the two always a paragraph away from being revealed.  The stringing-along sensation of Severina is fascinating and intense, and Severina herself remains continuously appealing as a motif for the narrator’s uncertainty and ambitions.

Chris Andrew’s introduction is phenomenal, and helps to place Rey Rosa among other Spanish-language greats who might already be familiar to an English-language reader.

Vila-Matas is one of the four or five writers who mean the most to me in life, and Bartleby & Co. is among his best.  In it, the failed writer Marcelo chronicles the world of delayed, stumped, deferred writers – those who would ‘prefer not to’.  Each of the 86 sections serves as a footnote to the text Marcelo is unable to write, and offers a typically Vila-Matas blend of fiction, reality and literary history.  Many of these authors exist; many do not.  Many of these works exist; many do not.  Anecdotes are probably – probably – not true.

What does it mean to fail, and how do we know when we have?  If a writer takes thirty years between books, but after his break writes a masterpiece, have they failed?  If they write an unpublishable jumble, have they failed?  Vila-Matas is interested in what failure means and why literature-sick people often view their lives through these lens.  Phenomenal stuff.

And there they are.  And here is a picture of all of them together having a good time, with the exception of Goytisolo’s work because I can’t find it.

(Also, buy direct from the publisher if you can!) 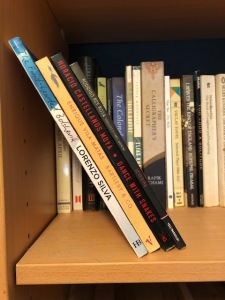